Thank you very much for your time and advice. It’s been great talking to you and guiding me to allow myself to listen to my thoughts.

Participant of the speed coaching in Cascais 2017

After 2015 in Munich, 2016 in Rome and 2017 in Cascais (Portugal) Christa Cantieni Cunin has again been invited to deliver Speed Coaching to In-house Counsels at the Annual Conference of the Association of Corporate Counsels Europe (ACC Europe).

Over the last Conferences Christa has coached more than 100 General Counsels and Legal Counsels from all across the world. 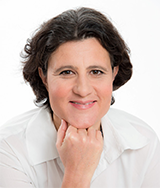